I received word at Pantheacon Sunday morning of a friend’s passing. He was not a famous author, or leader of a tradition, or a major contributor to the intellectual development of Pagan philosophy. For many in the Madison, WI area and the Midwest, Circle Sanctuary, Pagan Spirit Gathering ( PSG ), and hand drumming community, he was their rock.

Dennis Presser passed peacefully and unexpectedly of natural causes Saturday, Feb 16th at the age of fifty-four. He is survived by his loving wife of 25 years, Laurie Blue Heron, and his two children; Hunter and Allegra all of Madison, WI.

The details of his long history of service, as a veteran and through his dedication to environmental organizations are elaborated on his official obituary. As an activist conservationist he worked, often in leadership positions, to preserve and improve the outdoors he loved so much as a Pagan, hunter, and trout fisherman.

The loss of Dennis is felt across the breadth of his influence as a force of dedicated service to others.  In the Pagan community, he was known as a man of great personal strength, generosity, commitment, and ethical responsibility. He was willing to speak out and act in support of the people, community, and the natural environment he so loved.

Dennis was generous with his time and hands. He was an avid brewer and mead maker, and always a cheery and welcoming host. His easy-going and good-natured disposition made him a natural choice for anyone who needed help. If you were in need, he would do whatever he could to help. He was a man of his word, a commitment from Dennis was one you could count on. In a world of opportunistic ethics, Dennis was one who would stand for his beliefs, whatever the cost. 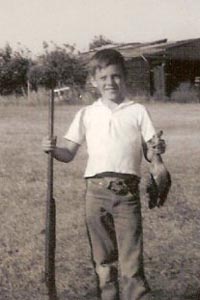 Dennis was featured in two PNC-MN articles. He talks about his spiritual experiences hunting and in the woods in “Pagans Hunting, A Sacred Way”   .  Dennis was active  in the occupation and protests at  the Wisconsin State Capitol in 2011. After walking with him around the capitol playing his beloved cowbell, he consented to an interview from his perspective as a WI. State employee and union steward ( “Pagan Union Steward Reaction to Wi Senate Action” ) .

Dennis was a fixture at the PSG drum circle and part of the “Groove Troupe” that co-ordinates the circle. He was not a “lead” type of drummer, but a leader in his commitment to the building of a strong community and drum circle each year. Dennis was confident that his contributions went to build something larger than himself over the week of the festival, and was present each night. He frequently offered his help within ritual, and contributed to the community ritual Judy Olson and myself helped produce on the final night of the PSG festival in 2012. When in need of  a committed drummer to simply keep a strong beat for nearly forty minutes, he didn’t hesitate to offer his help and give up his final night at festival. Our last time together was relaxing over a gin and tonic that night after the ritual.

I am not intimate with his role as a father, husband, and family man, but I observed he was a powerful force of support and strength in those roles. He was referred to often as “Papa Bear”.  I selfishly feel a deep sense of loss that can only be multiplied by those who benefited from his daily influence.  I miss my friend.  The name of Dennis Presser will be spoken for many, many years at community fires. He will remain present within us at each walk through the woods and field, and ecstatic experience within our community. His model of a quiet, loving, confident, and joyous man of strength is an example Pagans can seek to emulate.

The family requests no phone calls or texts at this time, but invites you to leave your memorial remembrances on a Circle Sanctuary sponsored page.

Memorial services will be held at CRESS FUNERAL HOME, 3325 E. Washington Ave., Madison on Saturday, February 23, 2013 at 2:00 pm with Reverend Selena Fox officiating. A visitation will be held at the funeral home on Saturday from 12 Noon until the time of services.

In lieu of gifts or flowers, the family requests donations in Dennis’s name be directed to: