This is the season filled with special holidays for Pagans. Besides Sabbats, special Moon celebrations and feast days, this Saturday some will be experiencing what has become a most sacred day… dawn on the opening of deer season in Wisconsin. For Pagan hunters, this is both a time of excitement and a spiritual marking of the wheel of the year. It is a time of purification and blessing, prayer and thanks giving. 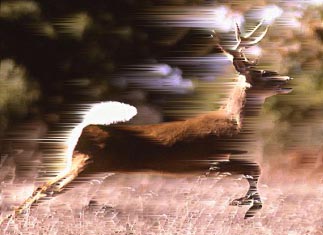 I interviewed three Pagan hunters, and also share my own experience as a hunter. On the surface the main stream culture of the hunt is a merchandising boom catering to ego based dreams of prowess fulfilled, and a wall trophy to prove it. For Pagans, it is a special time of connection to one’s self, family, nature and its cycles.

Dennis lives in Madison, WI. and has hunted in permitted state parks and preserves, but this year will hunt in Vernon county in SW Wisconsin. This management unit requires a doe harvested before a buck may be taken, but he has purposefully harvested more does than bucks over the years. Dennis knows herd control is a serious issue, and, “There are just too many people that are out there just for a big set of horns!”.

Dennis came from a hunting family in North Dakota. He participated starting at age 5 and shot his first duck when he was eight years old, but with school and military service his first deer did not come until age 28. He is more a ‘stalker’, not having the patience to sit still for hours, as many do. He studies his hunting area thoroughly and slowly moves through areas he knows deer will prefer. He discovered the ‘sacred’ aspect of hunting after finding his Pagan path, “In my youth, hunting was enjoyable, but basically a way to put meat on the table. I grew up on a farm where finances were usually tight, and hunting was a big support for a family’s food budget.” Now from a Pagan perspective, “I go out deer hunting now and appreciate what a beautiful animal a deer is, but also know its ability to overpopulate and destroy it’s habitat.” I see myself as part of that cliche’, ‘the circle of life’. The deer eat the vegetation, I eat the deer, and eventually I will go back and feed that vegetation with my remains.”

Dennis went through a phase of elaborate ritual hunt preparation. “I used to always go to the sauna and sweat, meditate about the deer, and ask for permission to take a deer, or two. Then when I went to the woods I would make an offering of tobacco, to the four directions, and Mother Earth, and Father Sky. I would ask Spirit to unite me with a deer. As I’ve aged, I have reduced my ritual to still offering tobacco to the deer, and the spirit of the place where I am hunting, but after I have killed the deer. I feel it more internally now, I don’t feel like I have to so demonstrate my spirituality externally. I know what I am doing. I watch the chickadees, the mink, the fox, the crows chasing hawks, and just know I am part of it. ”  For Dennis, hunting has a year round effect. His spiritual experience may “end” with a successful deer harvest but really just signals a short hiatus. “I enjoy my time in the woods, it helps me relax. I am back out there looking for shed antlers in winter, and note the condition of the herd and where they ‘yard up’ in groups.” A special blessing is his five experiences finding new fawns in early spring. “They stay frozen curled up in the grass, and I pretend I don’t see them, and they act like I am not there! This has always been a significant spiritual experience as well.” May, June, July brings the new prancing fawns, the buck’s adorned in velvet covered antlers, and as they all gain their winter coats, that leads right back into the thoughts of hunting, and the cycle completes.” 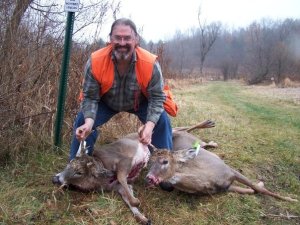 In his most recent collection of essays, Ted Kerasote writes,

Not a single one of us has to catch a trout to eat. Nor, for that matter, do those of us who hunt big animals like moose or elk and feed our families for a year have to kill them to survive. We’re making choices – more spiritual than economic – about grounding our souls in landscapes through participation, about becoming participatory citizens of a home place through eating what the landscape produces. The wading, the casting, the stalking, the picking, the plowing, are the ceremonial means to procure nature’s Eucharist.

Jude lives in River Falls, WI, and began hunting at his grandfather’s side as a young man. Like most of the Pagan hunters I know, he began with that simple rewarding experience of outdoor time with family, and fresh healthy harvest for their table. Jude kept this early experience on later, in the company of his brothers, but really has only now come into “his own” as a hunter with the deepening of his spiritual involvement in the hunt. Jude’s hunt cycle begins in late summer, “When I put up my deer stand, I do a pipe ceremony under it.I bring my pipe stone pipe from a Lakota craftsman,  Lone Wolf,  and bless it with kinni-kinnick and herbs.  I call animals to visit my area and make it a harmonious and sacred space. When I return to actually begin hunting,  I take the time to pray,  to express my gratitude for all the blessings I feel on that day,  to my wife,  and family and friends, and ask the “Great Spirit” for a safe and successful hunt.”  Jude may be specific in his requests,  “I may ask for a large old buck, or a weakened yearling that may not survive the winter.”

Jude has hunted by bow, shotgun, muzzle loader, and rife. In deer rich Wisconsin, he has literally hunted from April through New Years Eve, as herd control has become a necessity for farmers and motorist safety alike.  After a successful hunt Jude will, “Thank the deer, and promise to tell its ‘story’ to others.”  He spreads the remains of field dressing the deer, and returns the waste of butchering to the land to benefit the scavengers and wildlife from where it came.   He takes the hunter’s responsibility extremely seriously, and is a fanatic in preparation, practice, and skill development.

For Jude the hunting experience effects his whole life, “ You can’t kill an animal and not have it effect you. It is like directly experiencing rebirth, recycling, respect for the animals and the plants, and living from and with the land. I feel connected to nature. When you are hunting you are not just observing or enjoying nature, you are a part of it. Many see a birth, and some may get to save a life, but as a hunter you take that ultimate responsibility when you end a life.”

Most hunters do not kill every time we go hunting, but we are re-created as ‘original’ humans when we hunt.  We become , if only for for a brief time, members of a land community from which we are becoming increasingly estranged.  Hunters are choosing to confront the illusion, where freezers and grocery stores offer solace, that life sustains itself without the taking of other life. 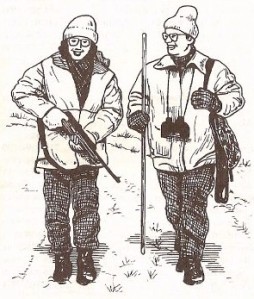 Robert hunts in Minnesota, with his step brother and his friend.  He personally did not harvest a deer this year, but their party shares their bounty and so he has venison for the year,  Robert was not raised as a hunter.  A buddy asked him to try it at age sixteen.  Graduation, a move to the twin cities, job and family delayed further exploration.  Eventually he found his way back to hunting on his own,  and later onto a Pagan path.  He finds that after becoming a Pagan he, “enjoys hunting more.  I am not so much out for the ‘kill’, as before. When I was younger, I was pretty much just out for the meat, now I enjoy the deer. If I get a chance to shoot a good quality deer that offers itself, well I go for it. ”  He said deer were part of his world and his life, and he hunts for the enjoyment of the experience,  “I watch them, and even feed them in my yard so I can enjoy them all through the year. “  He enjoys the ‘roasts’ but clearly enjoys being exposed to the animals.  I asked if he felt it was a spiritual experience for him?  He said years ago it really wasn’t spiritual, but now,  “I take the time in my stand to ‘ground’ myself.  I let my spirit go down into the earth and then out in a circle around myself.  I meditate for a bit and then bring myself back into my body.  Then I begin my hunt.”

Robert,  like all the Pagan hunters I talked to,  spends a significant amount of time checking and cleaning equipment,  preparing personally, and purifying everything in advance.  This he said was.  “to become one with nature, once I get out there.”  Robert honors any animal he takes silently in his own way.  He has concerns his hunting partners might not understand any outward ceremony.  Robert has a wetland on his property with a lot of wildlife that he enjoys year around with his family, and that he doesn’t hunt on.

For most Pagan hunters,  hunting is a deeply personal,  individual,  and often solitary experience.  Common to all the Pagan hunters I talked to was the idea of sharing this bounty of the woods with others.  Whether with family, friends,or community, the tribal nature of sharing the fruits of the hunt is deeply embedded in the human psyche.  All felt their experiences while hunting were not coincidences, or solely the result of their skill as hunters.  Some spiritual presence was felt.  They felt the animals in some way ‘gave’ themselves to them, in offering, and for their family’s sustenance.  None practiced the often used technique of large hunter groups ‘driving’ deer from the woods at full run to standing shooters. Pagan hunters feel the chances of wounding a magnificent animal using this method was too risky and disrespectful.  They feel they are rewarded for honoring the sacred nature of the deer hunt with full freezers.

For me the skills needed to hunt successfully create an intimate connection with nature.  I have learned more about myself from hunting than from any other life experience.  You learn the woods and the habits of many of its creatures,  the way of deer,  and really feel the marking of the seasons most Pagans just talk of.  I have had a woodpecker land on my hat,  watched mink searching for rodents,  even a rare bobcat slink by.  As we evolve into an ever more urbanized society,  this primal gift of food,  connection,  and revelations direct from nature is a blessing most Pagans never know.  Pagan hunters find that sense of union expressed by the Lakota phrase,  mitakuye oyasin,   which means “we are all related”.  Like many things we seek so desperately,  often the answers are there just waiting for us to find.  Pagan hunters find the answers within nature,  out in the woods hunting.