I had the honor to attend and drum for a Moribayassa (see explanation of this rite of passage below) for Marla, a participant at the Sacred Fire Circle at Circle Sanctuary last week. One of the unique benefits of participating in a Pagan community is the opportunity to share in rites of passage, and have a community of support and celebration for your own rites.  Pagans are as creative with the rituals that define and celebrate life’s transitions, as they are diverse in their beliefs.  This ritual was to celebrate the cutting of the dreadlocks from Marla’s head. For her it was the symbol of many changes in her life, setting aside the past, and an ending of a personal commitment the dreadlocks represented for her.  It was a powerful and joyous rite.

Listen to an excerpt of Moribayassa from this ritual

I asked Laurie, a Madison, WI.  hand drummer who helped organize the ritual, what is a traditional  Moribayassa  like?

Laurie:  Moribayassa is a rhythm and a dance that comes from Guinea, West Africa. It is performed by a woman just once in her lifetime. She does this dance as a way to celebrate having overcome some kind of adversity in her lifetime. She will announce she will do the dance sometimes years in advance, and drummers and singers gather when the time approaches to help her. The woman will dress in rags, which is a big deal because Africans are very concerned about their appearance. She dances in the rags and dances like she is ‘crazy’.  She dances several times throughout the village, and when she is done she takes off the rags and buries them, usually under a tree. She is then dressed in new clothing symbolizing that now she is a new person. She has overcome the difficulty, it is in the past now, and behind her.  It was quite an honor to play this rhythm for Marla in the context that it was meant for.    You can read more, and learn the rhythm in   “ A Life for the Djembe” by Mamady Keita.

I talked to Marla the day after her ritual.  She was still overwhelmed from the ritual.

When did you start dreading your hair?
Marla: In the spring of 2008.  My ex-husband’s sister was dieing of cancer. I hadn’t had contact with them for 15 years. His wife told him I should  be told, so he called me. His sister was a hairstylist, age forty. They called just as she was put on oxygen, and a week later she was gone.  After that, I just quit combing my hair because it just wasn’t important to me anymore.  It was compounded by the fact I hit forty and still hadn’t had children. That’s were it started, because I felt I was wasting time, and to honor her life.  My niece initially twisted my hair, and then they all came back out. I tried again back-combing it into dreadlocks and then super gluing beads in them so they couldn’t untangle any more.  Finally they started to “dread” on their own.

Initially this was a three-year commitment, I should have taken them out a year ago last St. Patty’s day.  I was going to do the Baldric charity fundraiser   and shave my head bald to raise money for children’s leukemia. Then my sister found she had the gene for breast cancer, so it seemed to be her time, to focus on her. That three-year point came and went, and I decided to leave them in for a while more.

Where you always sure it would be a special event to cut your dreadlocks?
Marla: Well this had turned into about seven years of hair growth. I had shoulder length hair when I started, and then once dreaded up, it grew on from there. I put a marker in at one point to see how fast my hair was growing. Since 18 months ago, I have been ready to cut them but the time never seemed perfect. I had no idea how it would happen.

What was the connection to the Moribayassa rhythm and dance ?
Marla: My first fire circle three years ago I tried a drum workshop, which was new for me. I am a singer, but I wanted to learn 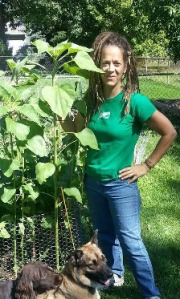 Marla with sunflower, from the seed received at Pagan Spirit Gathering ritual.

about drums. We learned Moribayassa. It was really neat, and it stayed with me. I thought it was so cool that a woman can just dance the past away, and go forward. Then I began going to Pagan Spirit Gathering (PSG)  and the first two times I got ready and dressed to attend the women’s ritual, and when I got there I couldn’t cross into the sacred space. I stood on the edge and I was not able to join my sisters. There was some blockage, Then this year at PSG, Laurie was going to offer another drum workshop and so I go and she says, “Oh Marla, you already know this one, we are doing the  Moribayassa!” I still wanted to learn it again, and she asked me to help play for the women’s ritual. It got me past the blockage and here was the  Moribayassa again.

Did anything else lead you to this change?
Marla: Over this period I have been doing a lot of personal work through fire circle, and friends. I quit smoking, caffeine, alkaline foods, and made a lot of healthy changes.  When I started this journey, I felt no worthiness. I felt unworthy as a person to receive. At this year’s PSG someone showed up for me, Tim, and I was ready for it now. We went on our ‘first date’ after the joy of the main ritual Saturday night, and it has moved on from there. I had gotten to the point in life where I had quit looking and quit trying, so I guess the adage is true, as soon as you stop trying  whatever you are looking for will come to you.

Why did you choose this event, Sacred Fire Circle, to cut your hair?
Marla: I was in the line for the shower here with two people who were hair dressers. We just started talking and they started playing with my hair. None of us had hair cutting equipment along. Ardeo and Moira did this with two pair of embroidery scissors and a couple of kitchen forks.  I did not know how to release myself from this pledge of keeping dreads I had made. It was hard because I had them as I entered this Pagan community and no one knew me without them. My identity was not tied up with them for me, but I was still that girl with the dreads. We decided to just get it done! I asked Moira to co-ordinate this hair cutting as a ritual, a rite of passage.

This is a ritual of releasing the past?
Marla: Yes, the past is gone.  Releasing the past and all that unworthiness shit. All the things I misunderstood and learned ‘wrong’.  Originally I wanted to just talk about the  Moribayassa in the ceremony, that this ceremony was to be that kind of ritual. I would cut my hair off and the past would be gone. Laurie came to me and said, “This IS your  Moribayassa!”  I didn’t realize that they were offering to do a whole ceremony including the drumming and dancing.

What was it like to have this celebration grow around you?
Marla: This is how far I have come. I do not usually let people fuss over me, but here I opened myself up and let others plan something for me.  I thought about making this a private ritual, but here it had to be a community event. To do it in private would have been too selfish. Everyone at fire circle participated in the changes I have gone through, so they all needed to be part of the celebration of the release of the crap, and the past, as I move on forward.

What was unexpected?
Marla: Well this should have been ‘my dance’,  but I was stuck in the chair getting my hair cut. It resolved by me asking my people to join and dance for me.  The people hovering around me cutting were singing, “Gone, the past is gone, Gone.” Slowly people gathered tighter around me singing and dancing and drumming.  I was overwhelmed with the feeling of support. It was the most powerful ritual of my life!

One thought on “Shedding the Past, A Rite of Passage – Interview”