The Earth House Midsummer Gather (EHMSG) was last week. This was its 11th year. 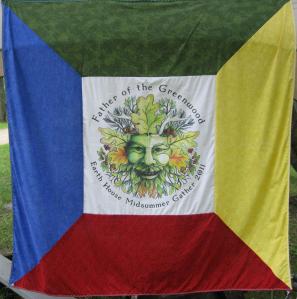 This year’s EHMSG had 78 people in attendance, 13 of whom were children, and about a fifth of those in attendance were first time attendees. The largest attendance ever was 86 in 2003.

The most common sentiment about the gather was expressed by Keith Vorderbruggen, “I don’t know who said it first, but the Midsummer Gather is like a family reunion without the drama.”

“I love it. It makes me happy. It’s a comfy little festival. It’s like coming home,” said Estelle Daniels, who’s been to every Earth House MSG. 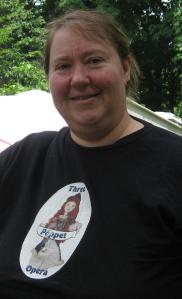 The organizers of the gather focus on being very welcoming. “I’m just tickled that we have such a great group of people. I love that there are so many children here. What I really love is the diversity of people here, and I think we really need to celebrate that,” said Neva Banaei, Vice Chair of the Earth House Project, and Chair of the gather. “The people here can honor their path and be accepted. And who else has Rick’s Café. I mean, really!” 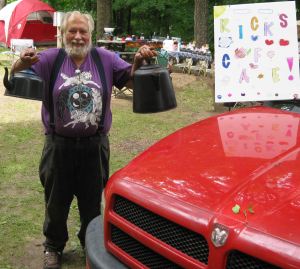 Rick and his cafe a morning fixture at Earth House

Every morning, Rick yells, “It’s coffee. It’s hot water too.” Then people gather at his camp for coffee, tea, and breakfast. It’s a contribution which earns him the affection of everyone in camp, of which he simply says, “Everybody likes coffee in the morning.”

The gather has many long standing traditions. Since 2005, they have had the same opening and closing ritual, in which wards are put up and wards are taken down respectfully. There has always been two feasts: one celebrating midsummer, and a “barbarian feast,” – just because we have so many excellent cooks. There’s often been a Bill the Cat (Discordian) ritual, and a bardic circle. Increasing a sense of community has been part of the tradition since the beginning, with the encouragement of people coming to the community fire rather than – or in addition to – individual camp fires. In the second year of the gather, and ever since, they have had a chocolate ritual. In 2005, they began the brewing contest. Pagan University began in 2005 as ministerial training and focused on those topics, but in 2006 Professor Murphy Pizza transformed it into a discussion of advanced topics of interest to Paganfolk. In 2006, Kari Tauring came and began a staving tradition amongst participants. Also in 2006, the Talentless contest began; an event of great importance to the Vorderbruggen family.

Keith Vorderbruggen has always been the judge of the Talentless contest, with the standing rule that the judge can be bribed. Dawn, who’s last name is now Vorderbruggen, tells the story, “The judge declared himself bribable, so one of the contestants, namely me, bribed him with a big kiss.” Of course she won, but Keith continues the story, “She felt so guilty about the bribe, so she turned down first prize.” They married September 22, 2007. Many friends from the Earth House community attended the wedding.

That sense of community continuing beyond the festival is a significant part of EHMSG. 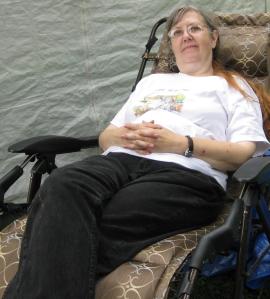 Earth House sponsors Coffee Cauldron, which fits perfectly with their mission of encouraging community, and also serves as a place for many MSG attendees to gather between midsummers. They also maintain a special email list specifically for festival attendees, created by Peggy McDowell.

The McDowell family has been coming to EHMSG since the beginning. They live in rural Wisconsin, and their children have grown up attending the gathers. When their daughter got sick, energy was raised at Coffee Cauldron and sent to her. Also, more EHMSG attendees visited her in the hospital then her own local friends.

Peggy found Earth House through Witchvox and attended the first gather. Driving into the field, at first they were uncertain, but within five minutes they felt incredibly welcome, with what she described as a “heartfelt commitment to accept everyone who comes here.”

Peggy’s husband Bill McDowell said, “It’s easy to support their mission, even though they’re in the Twin Cities, and we’re in a town of 4000 people. It’s a mission worth getting behind. Building community is a great goal wherever it happens.”

Peggy continued, “It felt really comfortable bringing my children here. They’ve grown up here. The people don’t have big egos. It’s a family reunion with people you like. The first time we went to the Twin Cities, Keith had us stay with him. We went out to dinner and filled the banquet room at the Chinese buffet with people coming to see us.”

Bill said, “When you find people who like you, it’s hard to turn away from that.”

The email list has also served a valuable function for many people. Mama Cat (or Rev. Paula) has been attending for 5 years and is one of the most active people on the list. “Networking is incredibly important to Pagans. We perceive ourselves as much more scattered than we are. Making that connection on the internet helps people realize that there’s another Pagan just next door. It’s nice for groups to connect with each other and connect as family. This list helps me stay connected with the family I’ve found here. There’s a lot of solitaries out there, and with the internet, you don’t feel as alone.”

Earth House was the brain child of Otter. Her main goal was to create a neutral community center for people from different Pagan paths to meet. Otter had been going to different gatherings for a long time. “I really actually believe in community, and we in the Paganistan area needed a community center.” Otter said of her creation, “A lot of lines came together and I said a few words in the right ears.”

Otter explained that there are a lot of different Pagan religions, so temples for a specific religion have the de facto effect of excluding people. Different groups were renting space in different places, and others were meeting in people’s houses. According to Earth House chair John Stitely, “there’s a limit to how long we can meet in people’s living rooms.”

Otter came up with the name because she saw the different Pagan religions as earth-based, and they wanted a place of their own, so it became Earth House.

Earth House organized as a 501(c)(3) to raise money to purchase a community center. There is currently a Pagan community center (the Sacred paths Center) which rents rather than owns its space, and Earth House donates 25% of the proceeds from the gather to them. Earth House Chair John Stitely said, “Sacred Paths Center is what we were trying to do when we started, except that we wanted to own the place rather than rent. That’s probably not going to happen with the downturn in the economy. That’s why we donate a quarter of the proceeds to them.”

The focus of Earth House is to raise money, and not to spend it. According to Neva, “That’s why we don’t have big name entertainment, because this is primarily a fundraiser.”

The idea of the gather was because Otter saw that people like events, and so the event was created to raise money

In 2001, the first EHMSG was held in the middle of a hay field in Wisconsin with around 40 people in attendance, with a well for water, a generator for electricity during the day, and very few other amenities. The theme of the first gather was, “A Field of Dreams” with the tag line, “If you come, we will build it.”

By the end of the first year, they were using the freshly-baled hay as targets (using discarded tent-poles as javelins), and afterward everyone cleaned out whatever was left in their coolers and they gathered for a group meal. This became known as Barbarian Feats and Feast. The tradition of the Barbarian Feast still continues on the last night of the festival.

By the third year, with 86 people in attendance and the event threatening to climb over the 100 mark, a need for a higher level of amenities/services than was easily provided, and an aversion to use community funds to improve private land, the gathering moved to a professionally managed camp ground.

Eagle Cave Campground has been the site of EHMSG since 2004. Eagle Cave was also an early site for Pagan Spirit Gathering (currently one of the largest pagan festivals in the nation) and Avalon. Lou Gastuch, facilities coordinator for the gather and Community Services officer for Earth House, first came to Eagle Cave for Avalon, and loved the camp site.

Eagle Cave Campground has electricity and water at every camp site, people can park at their sites (provided there’s room), there is a clean bath house with hot showers and flush toilets, and there are five reasonably-priced sleeping cabins with air conditioning. Under the campsite, there is also a cave which was the first commercialized cave in Wisconsin, with a large deposit of onyx. This year’s musicians, Folk Magic, performed in the cave at a previous gather and loved the sound, describing it as being like performing in a cathedral. Also, with their previous festival experiences, the owners are used to dealing with Pagans.

The first Year EHMSG was at Eagle Cave Campground, the owners were told that the nightly ritual would begin at 7pm, so they could come into the camp anytime between 5pm and 7pm to do whatever they needed to do. Used to the “Pagan Standard Time” of previous groups, they started one of the trash pick-up runs right at 7pm, and were very surprised to see the festivants already circled up for ritual and not running on Pagan-standard-time.

EHMSG is also known for a lack of in-fighting at the festival. As Neva put it, “There’s very little drama at the gather.” Because of this, for the past 11 years, Earth House has mostly been guided by the same core group of people.

The lack of issues suits head of security John Ossian just fine. “My goal is to do as little as possible.”

To which John Stitely said, “We haven’t had a single security issue all week. So long as this continues, he’ll continue having a job.” John Ossian has volunteered as head of security since the second year of EHMSG.

Neva and John are a couple and have been together 11 years, having met at the first EHMSG. Neva was the first-aid director, and John grated his thumb. John said of this, “I’ve had lot of nicks and bruises in my life, and that was the best.”