Skewb, founder of the Drum Tribe

I had a chance to interview Skot ‘Skewb’ Person, and Leslie Ravenhair of the Kansas City Drum Tribe (Katumba) while at Heartland Spirit Festival this year. There was some challenging weather, but it was proved again that a day at festival is a better day than anywhere else! It was a festival with one of the best drum and dance grooves ever, and I’d give a lot of credit to the Kansas City Drum Tribe.

Skewb is considered one of the main forces behind the tribe’s development. The Kansas City drum circle started as a meet-up group started by Kim Ousler in Overland Park, at Wild Oats, an organic food store. For Skewb it felt weird because the location was in an upscale suburban location. As Kim became busier, she passed the organization on to Skewb who energized it and changed the name to Kansas City Drum Tribe.

I started posting that drummers would be in Loose Park on Monday nights, an inner city park in KC. (Kansas City). I started going with a couple of friends that I met through the KC witches meet up. I got more people interested through using the internet, and people started showing up. It evolved from maybe 4-5 people regularly a week, to 150 plus people over four years!

When winter came we sought out an indoor space. We found an old warehouse space with no heat, so we turned on some space heaters and drummed. I eventually had to get a new space after a breakup and so I found a 2500 square foot studio apartment, and we had drum circles there twice a week. Over the last two years it has become part of my daily life.

We started having two drumming basics classes and a spiritual drumming class. Eventually some people connected who felt the same way, who were into drum circles, traditional rhythms,, and blending and jams and all that. People  like Sean Branagan, this guy named Miko, an amazing conga player, and then some members from a drum group called Djembe Kan who had broken up came,  and we had some amazing jams. People wanted something local and regular where they could show up and fill that third space that all rhythm junkies crave.

Some of the Kansas City Drum Tribe

At that point is when it became more community driven. When it moved into Skewb’s home there were more families, more children.  It would fill up completely and in the winter we would have to open the doors and the steam would just roll out! The house would be filled with drummers and dancers and kids running around.

We would have maybe 60 people show up each time. That was when it gained more of a community focus. It would start with some drums, and then became a circle, and then spinners and hoopers would join in. Everyone wanted to become a part of it. That is when the  ‘Gaia’ community (home to Heartland) began to get involved more too. It was an anonymous blend, no one had a political or religious or musical label attached. It became like a tribe. It was like a non-religious focused church.

Since it was weekly and convenient, we started a buffet of potluck food, it was like a church function focused on drum and dance. Instead of thunder drumming we wanted it to have some ‘bones’ some structure. A couple of started taking lessons from one of the areas ‘masters’, Bird Fleming. He has a Traditional Music Society. We needed time to practice and that is when the Drum Addicts came about two years ago. Then as us rhythm junkies practiced, people asked us for performances. That evolved into paying gigs.  Now we have taken all the different aspects of our group;  fire spinners, dancers, artists and organized it as well, almost an alternative arts society. We called it Katumba, a Sanskrit word for family. This is where we started seeking a 501c3 incorporation, to give it some structure.

It just kept growing and we had to do something. People feel the need to come to KC just to be a part of it.

We eventually moved to a Community Center, the  ‘Q’ (The Quilombo Cultural Center )  , because I had to give up my space. Now we have a Monday night drum circle, and a Wednesday night open jam. The center has other activities and we blended with those programs. We have added arts, and now have drum circles, traditional African rhythms, and kids stuff. We are basically educational.

We want to remain educational and reach more inner city kids and a broad range of people. We want to expand and bring in out-of-state teachers. We have done some amazing things in just the past year, brought in Buddy Helm and other teachers. 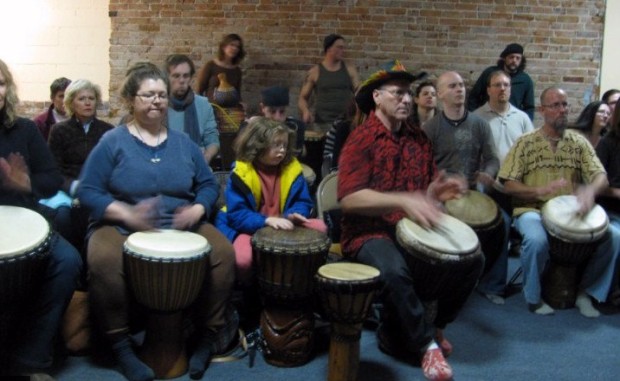 We put out a donation jar to help support our regular event, and then price any special events based on what amount of tickets we can sell to pay the costs. We often personally provide the food and other supplies when needed.

People contribute because somewhere they have to understand they are helping to bring about change.

Our slogan is that we want to revitalize the culture of Kansas City as a collaborative effort. The idea that people are stuck in their homes alone, tied to their televisions, well we want to change that. We want to get kids into community involvement and acceptance no matter who or what you are. Trying to incorporate some of the Pagan community’s values with a complete absence of any religious viewpoint or beliefs. It is based on a drum and dance community.

I am in charge of both the youth and the visual arts portion. On Monday nights I work with Karinne on a youth program based on the premise that there is something available hands on and fun for the kids when we do the Monday circle. There is two large rooms and then a lot outside where we can have a camp fire. They also have a gallery space to display artwork. There are so many people who make artwork who don’t know how to make the transition to displaying it. They have the need to do it, but don’t have the method to get it out there. I am trying to teach and help them learn how to put their art into the world. Amethyst Dreams, Aislinn’s shop is doing a lot with artwork as well. Even though Katumba runs out of the ‘Q’ some things are just bigger than that. The ‘Q’ is really supportive, and lets us run many programs within it.

There is no way to hold this back, we may grow out of this space sooner than we think. At first many from the suburbs where coming in to drum. Now we are reaching out to the local community and so we are slowly transitioning to a more inclusive, local, inner city base. It can be difficult because drumming is a fairly foreign experience even in the inner city.

I’ve watched the Kansas City Drum Tribe develop through my yearly contact at Heartland Festival. They have taken a festival drum circle of noise and made it into to something musical and spiritually empowering. They are an advocate for good drum etiquette and have become a lot more inclusive, helping to build a better community at Heartland. It is no surprise their message has spread to the general KC community year around!