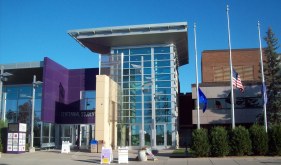 October 12-13, the weekend of the 32nd Annual Women and Spirituality Conference in Mankato, Minnesota.  We walk into a typical registration table, sign in and collect our name tags and conference materials.  The schedule, changes and cancellations, a copy of the October edition of the Minnesota Women’s Press magazine and maps – lots of maps.

The doors to the auditorium open and everything changes.  We walk in through banners that read: “I Enter In Perfect Love And Perfect Trust.”  The air is charged as people find seats.  There is much waving and greeting as women find friends they haven’t seen since the year before.  Business announcements are made, the staff and University thanked and then we are told “Welcome to our ritual led by Treewommon and an assortment of witches to honor the Goddess and the Sacred Elements.”  The opening ceremony is begun.

The directions are called, East and Air, South and Fire, West and Water, North and Earth, and Center.  Puppets representing the directions are paraded in and presented in turn, each carried by a woman who is also a representative of woman aging through the stages of life.  The maidens, the mother, the crone, and the hag.  The Goddess Herself, named as Bridget and carrying a banner with symbols of many Goddesses representing Center, Spirit, and Community.  The audience joins in the familiar chant and the Conference is off and running.

This conference is sponsored by the Gender and Women’s Studies Department at the University of Minnesota, Mankato.   Cindy Veldhuisen, the Business Manager for the Conference, told me that there were about 540 attendees this year.  This is up from last year.

Some of the reason for the increase in attendance can likely be attributed to this year’s keynote speaker, Starhawk.  This is Starhawk’s third appearance as keynote speaker for the Woman & Spirituality conference.  She draws attendees from across the five state area as well as from the east coast, Colorado and Canada.  Many of the women I spoke with who were familiar with Starhawk were also alumni of the Diana’s Grove Witch Camp.

Starhawk is often mistaken as the public face of Reclaiming, and indeed she was one of the co-founders of the original collective in San Francisco.  But her focus, especially in recent years, has been on Earth Activist Training .  She is teaching permaculture techniques to small communities throughout the world.  She’s just returned from an training in Palestine.

One of the things Starhawk talked about in her keynote address was “frame”.  How we choose to frame things affects how we see them, how we interpret the information.  She told about her first visit to the region as part of a Hebrew Class trip in her teens.  They pointed out that the Israeli side of the Jordan was green and lush and the Palistinian side was all brown and dry.

Since then Starhawk has come to realize that the Israeli’s control 80-90% of the ground water in the region.  She also knows that the Palestinians have been practicing sustainable agriculture in the area for thousands of years.  They feed their people without using much water at all.  Yes, it’s not as lush or green.  The base systems are fig trees, almonds and olives.  It’s a style of agriculture that sustains the soil and the ecosystem.

Permaculture respects those systems and uses modern tools with historically successful techniques to rejuvenate the soils and sustain the crops.  It is this concept of rejuvenation that Starhawk feels is at the core of the Pagan spirituality.  She suspects it is this philosophy that the consumer culture finds threatening.

There was a slide show about the devolution of the Bird Goddess.  There is strength in those postures of resistance, the stances of the neolithic and paleolithic statues.  Starhawk suggested that the Harpies, the Crones, the Witches as well as the guardian Angels all come to our collective consciousness from those early Bird Goddesses.  She reminded us that Harpies harp.  They point out the things that need fixing, and keep at it until those things get fixed.  She encouraged the conference goers, when they’re in the mood pick a fight, to get on the phone and call their congressmen.  Starhawk blogs about this connection between Paganism and politics at www.starhawksblog.org.

Of course the keynote speaker is not the whole of the conference.  Over the course of the two days there are also four sessions of  hour and a half workshops offered.  With 30-35 workshops offered in any given session there was a lot of variety to chose from.  Many of the presenters actually offered repeats of their workshops in a second session to make it a little easier for attendees to choose.

The conference spreads over 5 of the campus buildings using classrooms, conference rooms and dance and exercise spaces.  One of these buildings houses the vendor room.  An ample space for several rows of vendors to show their wares.  There were services offered, Reiki and tarot readings, along side the books, jewelry, drums, pottery and garb we often expect.

Many of the vendors are also presenters, either closing their booths for a workshop session or partnering with a friend.  The filmmaker and distributor of the movie “Things We Don’t Talk About: Women’s Stories from the Red Tent” was one of the women doing double duty.  She actually left her booth to be attended by a neighboring vendor while she screened the movie for conference goers.  This quick and deep friendship, the commonality and trust among women is probably the most common and profound product of this conference.  It’s the reason many women come back year after year.

The closing ritual again presented by Treewommon and friends is bittersweet.  We are introduced to the players.  The maidens have been “attending” this conference all their lives.  Their mother’s met here and have been close kindred for the ten years since.  (“Let that be a warning to you about the friends you make here!” the Priestess teases.)
We sing a powerful chant looking into each others eyes and falling into the arms of friends and strangers around us.  Tears, laughter and hugs are shared.  A spontaneous circle forms so that we can all see and rejoice in the power and beauty of women gathered in harmony and purpose.

The directions thanked and dismissed we are charged to carry this energy, the spirit of the conference home with us.  We are charged to remember what is possible when Women come together.

Dates for next year’s conference have not yet been announced.  To stay up to date on developments or to get on the mailing list go to: http://sbs.mnsu.edu/women/conference or contact the Gender and Women’s Studies Department directly at: 507-389-2077

Lisa Spiral Besnett is an occasional contributor to PNC.  Her book, Manifest Divinity, is published by Immanion Press and available in paperback or as an ebook at Amazon.com.  Spiral writes a weekly blog where you can read more about her personal experiences living a spiritually aware life.

Earlier this week Immanion Press released Manifest Divinity, a book by area author Lisa Spiral Besnett.  PNC-Minnesota interviewed Ms. Besnett at Sacred Harvest Festival about this book, which is aimed at “open[ing] up the readers understanding of the wide variety of Divine presence while respecting their personal religious framework.”

PNC:  Thank you for taking time during the festival to chat with me about your new book.  When did you first get the idea for this book?

Lisa:  I have been working on this material for a really long time and in some ways since I was first introduced to the concept of Drawing down the moon.  But framing this in the context of writing a book?  That was something that took a lot of people telling me I needed to write it before I finally accepted that.

PNC:  So how long have you been developing this material?

PNC:  You wrote this book not for a Pagan specific audience, so when you originally developed this material, was that developed for a Pagan audience or not?