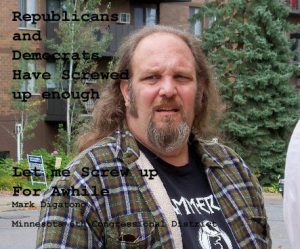 Mark Digatono, usually known more for his music than his politics, has thrown his hat into the ring for Minnesota’s Sixth Congressional district.  This is the district of Incumbent Congressperson Michelle Bachman, who is being challenged by Democratic Candidate Legislator Tarryl Clark.  Digatono is unable to appear on the ballot and so must run as a write in candidate.  He says he is running to give voters a wider choice of candidates, “Along with the Governors Race I believe both candidates are not viable choices. Both are too entrenched in the Status Quo of partisan politics.”