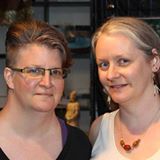 You would never guess from the business-as-usual appearance at the Eye of Horus Metaphysical Store that the owners are faced with the sudden challenge of relocating it by the end of this month and finding the funds to do so. As I enter “the Eye”, I am still greeted by the customers browsing, buying and getting their questions answered by upbeat staff. Stones of all types glisten beside cards stating their magical properties. A client seeking spiritual guidance exits into a room with one of the divinational readers. In the background a CD plays musical selections from an upcoming Wendy Rule concert being held there this Sunday. Thraicie Hawkner, her long silver hair flowing down her shoulders, and Jane Hawkner, with a short, cute pixie cut, approach me from across the busy room with undaunted looks on their faces.

Their confident appearance shouldn’t have surprised me. They have been running The Eye of Horus since October 31st 2003 in a previous location just a few blocks from their current space and even earlier as an internet business with booths at community gatherings. Meeting the challenges of entrepreneurship over the years has made them seasoned businesswomen with a fair amount of mettle. But, even so, finding out the first of July that they would need to find a new space and move the store into it by the end of July, would have been enough to make even experienced business owners sweat.

“During this crunch time it has been particularly motivating to remember how many times people have come in and said things like, “I did not know there was a place like this, I feel like I have come home” or “Your store is the reason I was able to reconnect to my faith”, said Jane. It keeps us tuned into the reason we are here and to what the Eye of Horus means to so many people. Knowing that we have been of meaningful service to the community has been fuel for problem solving through this challenge.”

“We have found a perfect size space for us that we can move into,” Thraicie said. She explained that the challenge has been raising the funds for the move. “We just found out July 1st that we would need to move, so we had no money to secure the new location, or any money to cover the closing of the store during move time, a rental truck or other moving expenses. So we developed the current fundraiser.”

Eye of Horus has a GoFundMe website  that enables people to either purchase “perks” or make a straight donation. The perks are in the form of discounted services such as divinatory readings, therapeutic massage, discounted gift certificates, or a book shelf in their name.  In this way, people can choose to donate or purchase “perks” at attractively discounted prices.

“We have never asked the community for handouts,” Thraicie stated. “That would not align with our values nor to our commitment of service.” She noted that the Eye of Horus fundraised to develop a new line of spiritual oils, but donors received “perks” for their contributions of services and products. “That way it was mutually beneficial. This is similar to what we are doing now to fund our move at the end of this month.”

What necessitated the sudden move? After the Eye opened in their first space they expanded rapidly – so much so that the space became too small for the increased demand. The solution was to move to the present location. “Although we had accurately calculated what amount of space we would need and could afford if we continued with the previous rate of expansion, that rate did not continue,” Jane said. “Struggling so much with overhead affected stock and sales. As it turned out, the first store was too small, but the current one is too big. We made what we thought were agreeable arrangements with our landlord to catch up and we were following through, but it took us by surprise when on July 1st he told us that he wanted us to move out. We had over a year left on our lease!” Thraicie added. “Fortunately, he agreed to release obligations if we agreed to be moved out by the end of this month, July 2014.”

That the support has been forthcoming has been a moving affirmation to the Eye’s valued place as both a business and a center of community. “We are thrilled and grateful to say that between the support we have received from our community and two generous loans we so kindly received from anonymous friends of the Eye of Horus, we are now able to secure a ‘right sized’ space near the present location.” said Thraicie. They are still in need of continued support – although the space is now secured, the Eye still needs to cover the costs of the move itself.

In light of this, I asked Jane and Thraicie about their continued passion and motivation about the Eye of Horus. “We’ve provided a safe place for the community or those new to Pagan paths to come and find resources in the way of books, supplies, classes, workshops, psychic guidance and rituals,” Jane said. Thraicie added, “It seems to me that many monotheistic paths tend to be traveled by the people of “The Book” whereas we are the people of “the library”. The spirituality of the average Pagan is hungry for more than one book and really needs to have a wide variety of information available. Therefore, in the absence of Churches, bookstores such as the Eye often end up as hubs of Pagan community.”

The Eye’s history of service to the Pagan community is extensive. They have provided events for Pagans that are mutually supportive to local and national authors with launch events, book signings, free talks and workshops. Writers like Orion Foxwood, T. Thorn Coyle,  John Michael Greer, and the late Olivia Robertson and Donald Michael Kraig have visited the store and community over the years.

They also have supported local Pagan groups financially and through promotion over the years including the Sacred Paths Center, Paganicon, and TC Pagan Pride, and have long provided a meeting place for the local Pagan AA group.

Thraicie was quick to add that Pagans are not the only public the Eye of Horus serves. Many earth-based spiritualities that do not identify as Pagan — such as Hoodoo practitioners, Heathens, and African Diaspora religions – are served, as are the New Age public. The Eye is proud to serve a wide spectrum.

“It really is an honor and a trust to be doing this work for such a great community!”  Thraicie exclaimed. ‘The continued support we receive this month will help us continue our mission long into the future. The Eye of Horus will definitely still be in business for years to come, and only a few blocks from the current location.”

Ways that people can support the store also include weekly silent auctions. Many of the featured items are from the ritual space in the Sanctuary.  There also is a 13% off sale going on to increase revenue and to also lighten the load when it comes time to pack.

If anyone would like to help with the actual move, please call the store to coordinate. The Eye will be temporarily closing July 28th through the 31st to relocate to the new location nearby. Strong backs and arms will really be appreciated!

“Both Thraicie and I deeply appreciate the support we have received and the continued support we will receive from the community this month to accomplish our relocation. We feel so fortunate to be part of the rich spiritual landscape of Paganistan!” Jane said.

And Thraicie agreed. “Our dream was to provide a spiritual space for people to gather, find renewal, grow, learn and bond in community fellowship. It is also a part of my values and work as a Priestess. Doing this work has been an honor, one that will continue to be upheld.”

If you wish to participate in the fundraiser for The Eye of Horus you may do so at http://www.gofundme.com/save-eye.

The Eye of Horus new address will be:  910 W Lake St, between Bryant and Colfax.