In October of 1994, the first Corn King burned during a Samhain celebration at Nels Linde’s home in rural Wisconsin, a place he calls Paradise. Last Saturday, the final 30 foot high Corn King was set ablaze in front of over 92 area Pagans. Two decades of potlucks, camping, and Samhain rituals come to a close that night.

Linde started helping a friend, Mike Olson, create Corn Kings at Olson’s home in 1991.  Starting in 1994 the practice moved to Linde’s property. Around 30 people attended Linde’s Samhain celebration that first year and it’s grown ever since.  “One year, maybe 1997,  in a bad winter storm there where as few as ten people to burn one a very simple one I built completely myself,” Linde said. “The last ten years it’s  been between 60 and 120 people each year.” In 1998 Linde’s future wife Judy Olson (no relation to Mike Olson) began attending and a few years later was key to the celebration.

Linde says the celebration has evolved over the years, “When I worked with Mike it had more of an emphasis on acknowledging the changing of the seasons. Kind of a potluck with a fire theme. When I narrowed my definition of community to be defined as Pagan and local to be within several hundred miles, we parted ways.” He says that once Judy Olson became involved, the rituals became more integrated with the burn. They began focusing more on the needs of the people who were helping build it and who would be attending in its design.

The celebration itself typically starts after dark when the circle is cast. After that guests go inside and enjoy a potluck feast. Attendee then process to the Corn King where the Samhain ritual is completed and the Corn King is set on fire.

This year followed that pattern. Attendees gathered in a double circle in the chill night while the circle was cast and the quarters called as a youth ran around the outside of the the property with a torch raised high. Judy Olson then explained to the crowd that this year there was a veiled tent where attendees could commune with their ancestors and write down a blessing or message. The empty chair, placed in the tent to serve the ancestors, and the slips of paper would be burned in the fire later. With that, the veil was opened and attendees were invited to either spend time communing with their honored dead or to go inside the house and enjoy the feast. 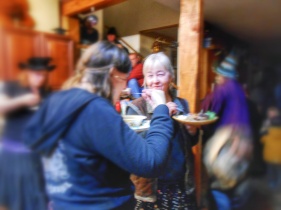 Judy Olson talks with Tasha Rose during the potluck

The warmth of the house was welcome after the cold evening. Kitchen Witches replaced empty pots and pans and dishes with full ones as the crowds piled food onto plates. Even with the large crowd, no one went hungry. I sat across from a young lady who came with a co-worker. She’s not Pagan but had heard so much about the celebration from her Pagan co-worker she wanted to experience it for herself. Most others had attended the celebration before and knew each other well. The chatter was lively as old friends caught up and newer people introduced themselves. 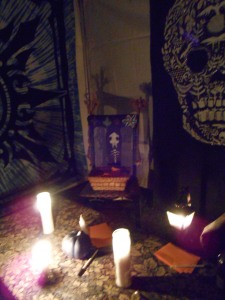 After eating I bundled back up in my mittens and headed out to the ancestor tent. Samhain isn’t a celebration in Hellenismos, but we have something slightly similar each month, so I didn’t feel as much need to contact my ancestors. However, a friend of mine couldn’t attend due to the death of her husband’s grandmother and she asked me to honor her that night. So I said a prayer for Grandma Nell and wrote her name on a slip of paper and placed it into the basket.

I regrouped with the people I came with who were hanging out at our tent in a small wooded area. Did I mention we were camping that night in 20 degree temperatures? We brought plenty of sleeping bags, blankets, and chemical pocket heaters to ward off the cold. There may have been some mead floating around but I’ll neither confirm or deny the honey wine. 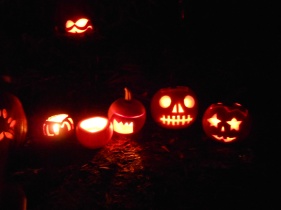 They were bundled up in blankets with only their faces poking out. I told them it was almost time for the culmination of the ritual and picked up out small carved pumpkins and lit the tea lights. The pumpkins were our price of admission. Each person was to carve a small pumpkin in honor of an ancestor to carry during the procession. I carved my grandmother’s name in mine. My husband left his blank, just a hold for the candle. Our friend carved a crown in hers, as she is related to royalty. We lit our tea lights and headed to the line forming for the procession.

A feeling excitement and solemnity spread through the line as we wound our way through the woods. Flickering candlelight lit our way and voices raised in song. 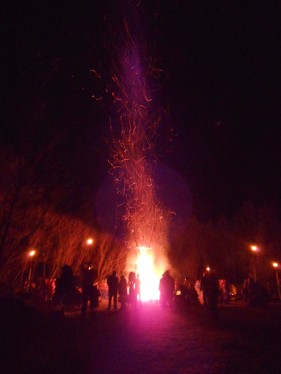 Attendees dance around the fire as sparks float upwards

We entered the clearing and there he was, the Corn King, raising 30 feet high with horns and a very proud penis. I’d seen him during the day, even helped build him the weekend before, but seeing him in the flickering light with the stars filling the sky made him into a stranger. We took our places in the circle and waited for everyone to file in. Once we were all there, we placed our pumpkins around the Corn King. Some called out the names of their honored dead, while others were silent. Nels and a few others carried the ancestor chair, the basket of messages, and a torch around the circle. The chair was placed between the feet of the Corn King, the message poured out, and the torch touched the Corn King as drums beat and attendees cheered and cried out.  The dancing began almost immediately, dim figures backlit by the fire. I was mesmerized by the sparks shooting from the top of the fire.  Although I’m not Wiccan I found the words Hear the words of the Star Goddess, the dust of whose feet are the hosts of heaven, whose body encircles the universe surfacing in my mind as I watched the fire dance into the sky, blending with the stars. 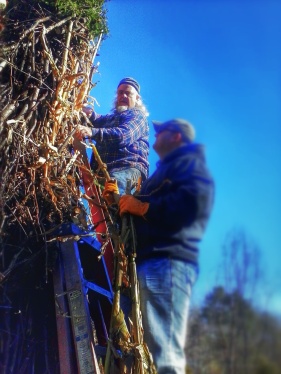 So much work goes into building the Corn King just to watch him burn down in one night. “We need between 8-15 a day, for maybe 6-7 hours work per day. We started at 4 days prep time and the last few years go by on three by being better prepared and more efficient. That equals 200-300 person hours in advance, plus many hands spending the day of the ritual in final preparation,” says Linde. He and Judy Olson spend additional time gathering materials, promoting and inviting, answering questions, and preparing our home and property to be inviting and hospitable.

As Wiccans, both Linde and Olson feel Samhain is the most important day of the year which is why they spend so much time and effort to make it special. Linde says the celebration is a dramatic experience that demonstrates the transitory nature of life, “Like life, it is here, and we work so hard to make it exactly what we want, and then it is suddenly gone. These are things most Pagans think about this time of year. For a young person, this building of a thing for weeks, only to be destroyed, can lead to very profound revelations. Why a man?  In many magical traditions there exists a male figure to act as a sacrifice to ensure the survival of a people, to survive the coming winter. This is the ultimate visualization of that sacrifice and a reminder of all the sacrifices our ancestors made, those we have made, and those we may some day be asked to make for our people.”

Olson says, “Remove the gender from this and the burning of an effigy represents an ending. This is the Witch’s new year, it is a time to finish our work and get your plate cleaned for the next year. For me this always works. Once the man burns I am ready for a whole new year and a new cycle.”

I’m not a night owl so once the Corn King was mostly burned down I headed back to my tent to let the ritual soak in while I slept. The cold was a shock once I left the relative warmth of the fire. I snuggled down into my blankets and fell asleep to the beat of drums pondering how fleeting our time here on earth is. At forty-mumble these thoughts are beginning to carry more weight. Will everything I ever was burn away in a moment or will something last past my death? If I died tonight what is the state of my timé? Uncomfortable thoughts.

.
In the morning, those of us camping or staying in the house gathered for a large breakfast. We had time to sit around the table and talk. About the ritual, our night’s sleep, and future gatherings.  Linde says he started holding this celebration because he had the space and magic circle to do it in. He says, as a potter, it also appealed to his sense of artistry, “I love a big fire and have always had a relationship with fire as a potter. Spiritually it connects with many seasonal aspects of rural living, and a Pagan life style.”

But what makes it all worthwhile for both Linde and Olson is the people. “My favorite thing is spending a length of time working beside people that help build. I get to know them much better. There is always a few new people to get to know each year. It is great to watch them experience the whole process and become a part of the building family that develops,” says Linde.   He says its enlightening to see how people react to working a long time on something consumed so quickly built simply to inspire others. Olson agrees, “During the actual event weekend, the time spent with people from all over the Midwest just sitting in your jammies round the breakfast table, or playing a group game late at night after the burn, or drumming, or tending the fire,  these are all very bonding and I love the bonds this event has created that will last forever.”

So why, after so many years, are they stopping? As noted earlier, building the Corn King is very physically taxing and takes up a considerable amount of time. They both hope someone else takes up the torch and hosts this type of celebration. But if it does die out, they wish for the community to find other things to build that inspires themselves and others. After all, death is part of the cycle, which leads to rebirth.

Below is a short video of the burning of the Corn King at this year’s Samhain celebration and  a link to a write up about the 1996 celebration.