While at the Sacred Harvest Festival in SE Minnesota I took the opportunity to catch up with Brad Murphey, Teresa Frank, and Bonnie Hanna-Powers of Murphey’s Midnight Rounders.  I brought over a bottle of wine and asked them what they were up to.  I was excited to hear they were heading back to the recording studio directly from the festival.  My excitement grew when they told me they were going to be putting out not just one CD, but two. Interview and video of performance below. 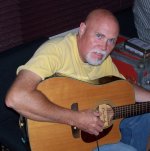 Teresa:  It’s going to be a two CD release.  We’re staying with the same kind of a format with a Pagan CD and I don’t want to call it non-Pagan…

Bonnie:  You can play it on the radio without being afraid.

Teresa:  We have yet to come up with a name for the CDs, but some of the songs that are going to be on there are New Age Pagan Rag, Pics of Life.

Bonnie:  These will all be on our Pagan CD.

PNC-Minnesota:  So you are going into the studio on Sunday.  When will you release your CDs and, more importantly, when is the release party?

Brad:  At the earliest, it wouldn’t be until February.  That would be the very earliest.

Bonnie:  We just started laying down the scratch track for three songs and those are just something to reference as we are recording each part.

Teresa:  So the process is, lay down the scratch track so we have a frame of reference.  Then we each come in individually and record our guitar, our vocals, percussion, what have you.  And then Paul does his magic, he puts it all together.

Bonnie:  We work with Paul [Ferrise] in his basement studio and he has lots of fun toys and he’s been so gracious with his skill and his equipment.  He’s excited about it and we’re excited about it.

PNC-Minnesota:  There are Pagan bands and they sing Pagan songs, but many of them sing about the mythos.  You all are different.   Your songs are about Pagans and their practices, rather than the mythos and stories and that sets you apart from other Pagan bands.  How have you developed that?

Brad:  We deal with the issues.  We deal with the people.  Those are the things that inspire us.  We don;t sing so much about the mythos.  There are already some really great musicians who sing that type of song.  why take away from them?  Let’s promote those musicians that tell those stories so well.  They inspire others through their retelling of the myths.  Arthur Hinds does an amazing job with the stories he tells in his songs.   How do you jump in and do something second rate to what he does?   So we do what we do best, which is singing abut our people and what we do.

Teresa:  And sing it in three part harmony.


Performance of Sky Father by Murphey’s Midnight Rounders at the 2011 Sacred Harvest Festival. Drums by Karen Brookshear and Jim Esralian. Dancing by their daughter Brielle.