Adam Blodgett has eight more days in a Kickstarter campaign to fund publishing the Chibi tarot deck.  According to Blodgett, the Chibi Tarot fuses the traditional spirit of the tarot with the visual aesthetic of anime, manga and video games.  He says that while it is “super-cute” it maintains the integrity and depth of the cards and their meanings. 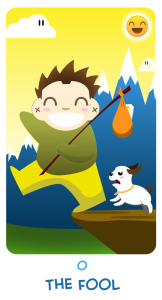 Blodgett hopes to raise $5000 and has already garnered 71 backers who have contributed $3396.  As most backers receive a special edition of the deck in exchange for their support, this kickstarter campaign is modeled more like pre-ordering of a product than a donation towards the arts.  However, the deck only comes into existence is the funding goal of $5000 is met by June 23rd.

The Chibi deck is not unique in only its artwork, the interpretations of the cards are also different from most decks to have come out in the last 50 years.   “I’m disagreeing with [Aleister] Crowley and [A.E.] Waite in the sense that I’m going back to the more traditional Marseille definitions,” says Blodgett.  He describes the Magician as being magnified into a magus in most decks when he’s a humble street magician.

Another difference is the Hierophant.  Blodgett says there are mostly negative portrays of the Hierophant in modern tarot decks, especially those aimed at non-Christian audiences, “The hierophant is a symbol of any religion that is organized, any group that comes together and has a leader.  I’m re-infusing the joy of worship together, leaders helping others,  and that’s really radical, in a way.”

That difference in view translates into the artwork.  In Blodgett’s deck, the hierphant is not shown weighed down by two large metal keys or covered in thick church robes.  He’s shown enthusiastically leading what looks like a Pagan version of a tent revival while  holding a Book of Shadows.

The question in my mind, and in Blodgett’s, is there a market for this type of deck?  Most decks focus on the mystery or power of tarot while Blodgett’s deck does not, “I want to make tarot approachable for people who otherwise wouldn’t come near it.  Making it cute makes it more accessible and opens people up to being more vulnerable to the cards.”  While the style of the artwork may make it less intimidating it doesn’t clear up who the target audience is for the cards.   “The Kickstarter campaign has been useful to me in that I realize my audience is not who I thought it was,” he notes.  He originally thought the main audience would be occultists who also like manga or vinyl toys.  “It turns out I’m the only person who inhabits that spot,” Blodgett joked.

Wired, who featured the Chibi deck in an article called 5 Artsy Kickstarters for Geeks & Moms, believes the deck is geared for “kids and kids at heart.”  In showing the artwork of the deck to a few Pagan friends, one remarked, “What a nice first tarot deck for a child.”  After relating that to Blodgett he said, “I am absolutely fine with this being a child’s first tarot deck.”  He says his son loves the illustrations and can identify with the cards in a way not possible with other decks.  He went on to say, “That said, I don’t want people to think it does have serious chops because it does.  There is depth there.”

To take a look at the project and view a short video on the Chibi deck, which includes Blodgett’s son using the deck, you can visit his Kickstarter page.

Adam Blodgett’s bio:  Adam Blodgett is a self-taught artist who is deeply interested in and influenced by pop culture, especially comic books, video games, animation and toys. He enjoys finding ways that those modes of expression can be twisted and stretched to accommodate a variety of ideas far beyond the original intent. He loves the way that the Japanese love of cute has infiltrated the US and mutated to create a unique form of art, especially in the art of folks like Huck Gee, Luke Chueh and Andrew Bell. In short, he’s a just another kid who wants to keep playing make-believe, and never have to grow up.

Disclosure from the editor:  After interviewing the artist for this article I contributed to his Kickstarter campaign.

I sent a request out to several Pagans I considered notable, experienced, and yes, maybe

intuitive enough to speculate on the coming year with some degree of accuracy. I asked three questions:

Responses I received in no particular order:

1. The financial squeeze for many should result in a tighter embrace of our collective of our ties to each other.
2. The symbol I see is the spiral cycling in and out simultaneously.
3. Paganistan’s  population will grow as the gods of the dominant religion continue to fail the people.