Sacred Paths Center opens national public ancestor shrine and sacred spirit altar.  Names of Honored Dead from around the globe can be inscribed on plaques and pilgrimages to make offerings welcomed. 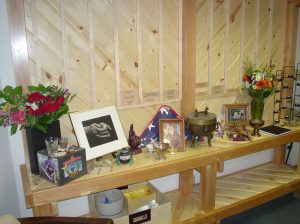 “We hope people will treat the shrine like the Vietnam Memorial in Washington, D.C.,” said Mr. CJ Stone, a board member at Sacred Paths, “a pilgrimage to hand down as a tradition, a place where they can go and see the names of their significant dead and honor them. And not just humans. We hope people will remember their animal friends and family, too.”

“People talked a lot about having a shrine like this,” said Teisha Magee, executive director of the Sacred Paths Center. “An altar where anyone could come and light a candle, burn incense, put up a name plaque, or otherwise honor those who have passed the veil. Three of our members—Volkhvy, Ciaran Benson, and CJ Stone—came together with one mind and created exactly that.”

The shrine was designed and built by Volkhvy, who has been working in wood for over 30 years. He put over 120 hours into constructing the shrine. “I built this entirely of wood—without metal of any kind— to reflect the Shinto aesthetic that informs it. It has an ample altar area to use for offerings and to leave
memorabilia. It also has a large vertical area for name plaques.”

“I was very impressed with Volkhvy’s design,” said Ciaran Benson, a Shinto priest who spent two weeks finishing the shrine. “I was right up against this thing, sanding it, so I know intimately every aspect of it. It is beautiful, graceful, large without imposing. I’m proud to have the names of my family, friends, and pets displayed here.”

“Well, I hardly did anything,” said Mr. Stone. “Volkhvy and Ci put their sweat into this and their blood—literally. I just listened to our members and brought the idea and the money to Volkhvy and Ci. But I really can’t say how glad I am to have this. My wife was a prominent figure in Paganistan. When she died, there was no place to memorialize her. Now there is. Hers was the first plaque to go on the shrine when it was finished.”

“The shrine is open to everyone,” said Ms. Magee. “We aren’t checking your Pagan credentials at the door. Candles and incense are available on the altar. Some folks like to leave flowers, food, or other offerings. For a small donation, Sacred Paths Center will inscribe an oaken plaque to go on the shrine. It’s like a small headstone, you get to choose the text and you can include a special message. There’s a plaque request form on the Sacred Paths Center’s website.”

Sacred Paths Center (SPC) is a member-supported, non-profit community center serving alternate religions in Paganistan (the greater Minneapolis-St. Paul metro region) and is the only Pagan community center currently in operation in the USA.  SPC emphasizes Earth-reverent spirituality, but their goal is to provide quality metaphysical merchandise, intuitive services, education, and practice space for seekers of all paths.

Let me be very clear. The first thing monotheism (and colonialism) did was disconnect us from our ancestors, from our roots, from that precious, precious knowledge of who we are and where we come from. It gave us instead a filter of disconnection, repression, over-intellectualization, excessive stoicism, fear, greed, and confusion. It did this so well that, as I noted above, many of us don’t even realize that we come from indigenous roots; we don’t recognize the filter. Today many Heathens and Pagans talk about reconstruction and restoration, but what does that truly mean? I think reconnection is a far, far better word, and that reconnection begins with the dead. It begins with our willingness to work at that connection. Most of all, it begins with a return to our own indigenous worldview.

So how exactly do we reconnect? As one wiser than I said, one ancestor ritual at a time, one offering to the Gods, one prayer, one thread at a time. Each time you honor your dead, you’re doing something revolutionary. You’re subverting the status quo, a status quo based in colonialism, oppression of our folk ways, and greed. Fight that system. Be subversive.